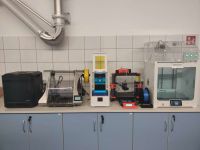 
The main goal of the Core Facility of 3D printing is to facilitate employees, doctoral students and students access to 3D printing technology that enables the design and production of three-dimensional objects. This technology is not limited to the production of commercially unavailable devices or teaching aids, but also allows you to print models of the patient’s organs created using the pre-procedure MRI / PET scan.

The idea behind the creation of the unit is not only to enable the emergence of technical solutions that are innovative or difficult to obtain commercially due to high cost or long waiting times. The unit also offers substantive and advisory assistance, incl. at the stage of creating a model in 3D modeling software. The facility also provides knowledge on the selection of the appropriate material for printing (prioritizing selected aspects: mechanical strength, chemical properties, biocompatibility or aesthetics). The studio was established as part of the Research University program.

The mission of the facility is to provide various types of services to members of the University community, with particular emphasis on its priority research areas.

The facility is equipped with the following elements:

The unit provides the following services:

The team of the Department of Pharmaceutical Chemistry of the MUG offers metabolic stability tests of drug candidates using the in vitro method, using the microsomal subcellular fraction. In a typical assay, microsomes obtained from human liver play the role of a biotransformation catalyst. The potential drug to be tested is incubated under strictly controlled conditions in the presence of the enzyme preparation and appropriate cofactors. Immediately after the start of incubation and at the defined measuring points (maximum incubation time is 2 hours), a sample is taken and then analyzed using the LC-MS technique. The metabolic half-life is determined on the basis of the obtained chromatograms.

Addressees of the offer

What are the metabolic stability tests for?

What are the possibilities of extending the proposed offer

The scheme presented above, including the determination of the metabolic half-life, may be supplemented with additional tests, including:
• Determination of cytochrome P-450 isoenzymes responsible for biotransformation
• Determining the possibility of the formation of reactive metabolites that interact with cellular nucleophiles
• Development of a model of the relationship between the chemical structure and metabolic stability within a given series of compounds 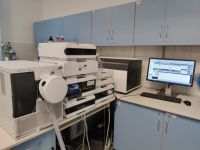 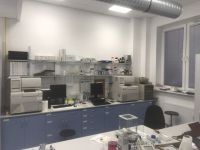 Labeling of other organic substances

As part of the analysis of other organic substances, the following tests are performed:
• mass measurement using the ESI technique
• substance identification by “soft” and “hard” fragmentation
• analysis of volatile substances by gas chromatography with mass detection (GC-MS)
• analysis of organic compounds using capillary electrophoresis coupled with LIF detection. 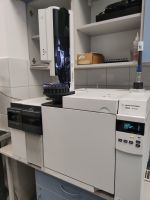 • optimization of the conditions for the separation of analyte mixtures, including the selection of parameters for the preparation of the sample for analysis (extraction), as well as chromatographic and electrophoretic conditions (DryLab, chemometric optimization),
• validation of analytical methods and statistical and chemometric processing of results,
• study of the relationship between the structure and activity (QSAR), chromatographic retention (QSRR) and metabolic stability (QSMSR) of a given series of chemical compounds using chemometric techniques and specialized software: ACD, Dragon, HyperChem, Gaussian, SIMCA
• pharmacokinetic studies in the determination of drugs and their metabolites,
• stability and stability testing of pharmaceutical preparations,
• ELISA tests,
• study of bioavailability and bioequivalence of pharmaceutical preparations.